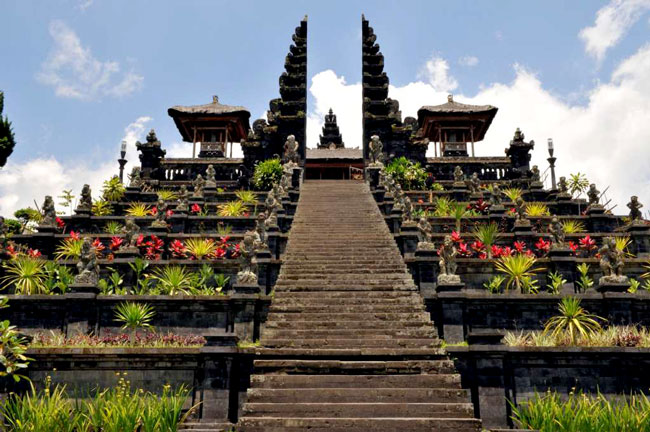 In Indonesia, Bali Province perhaps becomes a prime tourist site both for locals and foreigners. It is true the region has tons of beautiful beaches and interesting traditions. However, tourists should not overlook the presence of majestic temples! One of them is called the Great Besakih Temple, for the example. As the name suggests, it resides in Besakih Village and belongs to Rendang Sub-District. In terms of region, the temple is part of Karangasem Regency. The main function is indeed as a worshipping place for local Hindu people. Still, it also has become a recommended vacation destination for everyone. So, what are the reasons?

The Nuance
Unlike regular Hindu temples in Indonesia, this one looks more majestic due to its size. Not to mention it features more than one temple! Due to the size and number, Besakih Temple is considered as the biggest one in Indonesia. The prime structure is called Penataraan Agung. As for the extras, tourists may find 18 temples that surround the biggest one. Another interesting feature is the presence of a grandiose gate and stairs. It is the main entrance to enter Penataran Agung, actually.

Exploring Besakih Temple
The most important thing to do once arriving at Besakih Temple is to learn more information related to the construction. In a nutshell, the temple becomes the center of worshipping for Hindu people. In fact, it consists of many spots to do the worshipping which is called Pelinggih. The next vital information is related to the person who built the temple! It is said he was an Indian namely Rsi Markandeya. The rumor has it. Both Java and Bali Island are connected to each other back then. That means there was no Bali Strait at all in the past. That island was called Dawa.

Photography and exploration become two next activities that tourists can don when visiting Besakih Temple. After taking some pictures or photos at the outside part of the temple, tourists should take their time to enter the building. The most noticeable object is none other than Meru Tumpang Solas, which is the eleven-tiered weed roof. Aside from it, tourists may also see three thrones where Trimurti, Shiva, and Vishnu God reside.

As the main requirement to enter Besakih Temple, tourists should wear traditional attire of Balinese. It includes Udeng, Saput, and Kamen. Have no worries. Tourists can rent the attire at the parking area. Another important rule is that visitors are not allowed too much noise when entering the temple, especially during the worshipping procession.

How to Get There
For those coming from Denpasar City or the capital of Bali Province, they need to conduct a trip for about 1 hour and 34 minutes. It is because the distance between those locations is 53 km. For a faster trip, it is recommended to take Dr. Ida Bagus Mantra Street though. The first destination is Karangasem Regency. Next, tourists should head to Rendang Sub-District and reach Besakih Village right away.