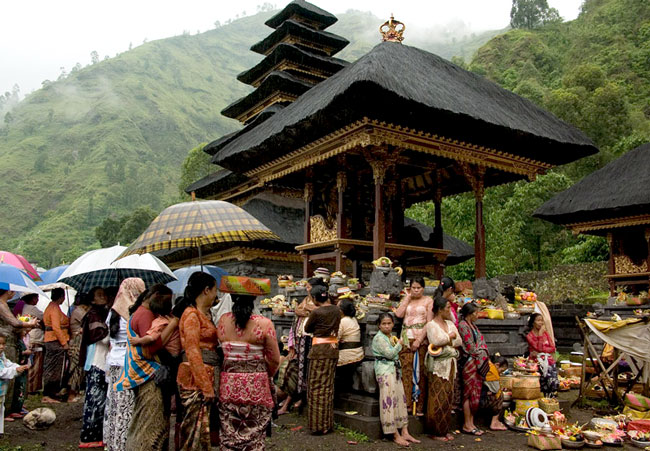 Lots of tourists are looking for a new experience when spending a holiday. In this case, they should not miss the opportunity to visit a creepy and unique village called Trunyan in Bali Province. To be exact, the location is in Kintamani Sub-District and it belongs to Bangli Regency in Indonesia. Also, the location is near to Batur Lake. One thing that makes the village popular is the villagers’ thrilling tradition. Instead of performing “Ngaben” (Balinese cremation), these people put the dead body on the ground and leave it on Trunyan Cemetery! Amazingly, the site doesn’t emit any unpleasant smell caused by the corpses. How is that?

The Nuance
It is true Trunyan Cemetery becomes the prime feature of the village. In fact, it lures lots of people either those who live nearby or outsiders. Now, why don’t the corpses emit an unpleasant smell? The reason is the presence of big trees that grow in the area called Taru Menyan. It is said those trees are able to neutralize any bad odor on the site. No wonder, the name of these trees is used to name the village as well.

Exploring Trunyan Village
Even though Trunyan Village offers more than just such unique funeral, most tourists are interested mainly in the cemetery. No wonder, it has become the icon of the village itself. If tourists are lucky enough, they are able to witness the procession directly! At the time, the families of the dead person only need to prepare several bamboos as the cover of the corpse. The prime function is as the fences, actually. Near to it, some offerings and incenses are placed as well.

Here is the thing. Any corpses that have turned into skulls are collected together in a place. The purpose is to give a space to new corpses, so the cemetery doesn’t run out of place to put the new ones in the future. Not to mention it involves several requirements to be able to put a corpse there. This includes the way how the person dies, either it happens normally or not. For further information regarding the requirements, tourists can talk to villagers later.

Another interesting thing that tourists can find in Trunyan Village is the Barong Brutuk Dance. The locals may wear creepy attire and perform a dance in a group. Somehow, the atmosphere is quite mystical and some tourists can’t even stand to watch it! For others, it becomes a nice entertainment to watch while spending some time in the village though.

How to Get There
From Denpasar City, a trip to Trunyan Village may take around 2 hours and 49 minutes. It is because the distance is 85.7 km. For a faster trip, it is recommended to take Dr. Ida Bagus Mantra Street. What tourists need to do is to visit Bangli Regency and head to Kintamani Sub-District afterward. If necessary, they can hire a tour guide to show the direction efficiently.