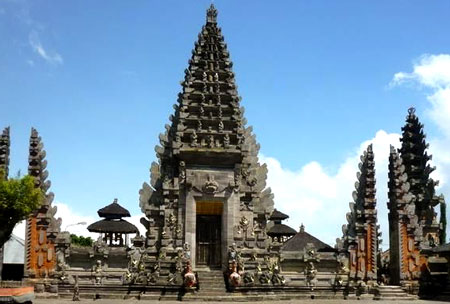 When exploring Bali Province, tourists may find several beautiful Indonesia temples including the one called Ulun Danu. This one is located in Kintamani Village and belongs to South Batur Sub-District in Bangli Regency. What makes it special, though? In terms of popularity, it is the second best one after the great Besakih temple. No wonder, it also has a huge number of visitors both those who come for worshipping and those who come for spending a holiday. Despite the old age, the temple looks beautiful and well-maintained. The fact is that the temple comes with other names like Bat and Batur Temple!

The Nuance
According to the locals, the temple was built in 1926. The purpose was to show gratitude to Goddess Danu (the Goddess of lake and river). In terms of name, the temple has the meaning of Dewi Danau or the Goddess of Lake. What about the nuance? Once arriving at the temple, tourists may see a complex with 9 temples on it. Not to mention hundreds of pavilions reside within the area. These small temples were built to worship other gods, actually. Thus, it is better to come with a tour guide who can tell thorough information about the place.

Exploring Ulun Danu Batur Temple
Exploration becomes the prime activity that tourists can do in Ulun Danu Temple. For the information, there are 5 main spots to explore! The most dominant one is called Meru, which is considered the holiest spot. During exploration, though, tourists should obey any given rules and instructions. One of them is to wear traditional attire given by the management before entering the temple. No one is allowed to violate such rule, for sure.

Well, it is true tourists are allowed to carry a camera while exploring Ulun Danu Batur Temple. However, they are not allowed to cause too much noise or disturb other visitors (especially the worshippers). After all, they are exploring a sacred place. In this case, it is better to hire a local guide who can tell tourists regarding what to do and not do there. Have no worries. This person helps them to get more information and history regarding the temple, as well.

For those who never come to Ulun Danu Temple, they must learn a little bit history of the site too. It is said the temple was once located at the foot of Batur Mountain. Due to a big eruption, it was destroyed though. Later, the villagers decided to relocate it and built a new Ulun Danu Temple in the top part of the caldera. Somehow, it was proven as a good decision in order to avoid further misfortunes.

How to Get There
A trip to Ulun Danu Batur Temple takes approximately 1 hour and 49 minutes. It is because the distance is 64 km. This trip becomes faster if tourists take Nusantara Street, though. What they need to do is to head to Bangli Regency first. Next, they can simply visit South Batur Sub-District and reach Kintamani Village afterward.