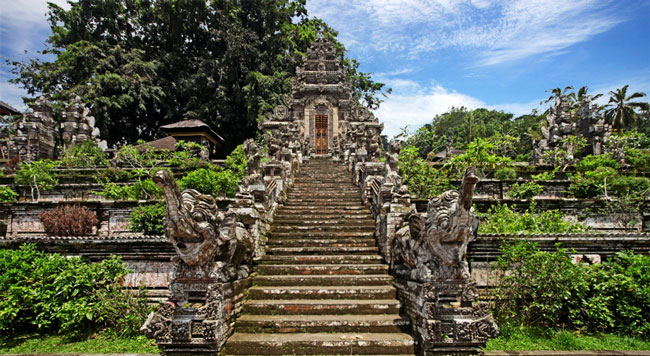 Being a region with its significant religious value (especially related to Hindu), Bali Province indeed offers many interesting temples for tourists to visit. One of them resides in Bangli Regency called Kehen Temple, actually. To be exact, the location is in Cempaga Village. It is true each temple in Bali has a distinct uniqueness. What about Kehen? Unlike regular temples (which usually come with an open area), Kehen has the entrance called Kurung (closed). Not to mention it has both historical and unique value that tourists won’t find in other temples.

The Nuance
Once arriving at the site, the first impression is the serene and lush environment. It is because the temple is surrounded by dense trees and several types of plants. No wonder, the nuance is quite relaxing too. In terms of size, Kehen Temple is considered moderate but it features some unique and noticeable ornaments. For instance, tourists may find a giant banyan tree located behind the temple. On that spot, there is Bale Kukul where tourists can use for relaxation as well. What is more? Three inscriptions reside there, which are related to the history of the temple!

Exploring Kehen Temple
For visitors, they must miss the chance to learn a little bit history about Kehen Temple. It is said the temple was built in 1049 AD during the reign of King Anak Wungsu. At the time, the temple mainly became a sacred place to take an oath for the royal officials. It is said any unfaithful officials would be punished or cursed by a terrible fate (Sapata). Even the curse won’t disappear for generations! Even though not all tourists believe in such history, it still becomes an interesting story to hear later during the visit.

For the information, Kehen Temple also becomes a worshipping place for the local Hindus. These people pray to Hyang Kehen or Hyang Api, which is the God of Flame. It is even said the temple has given much premonition and clues regarding the upcoming misfortunes or disasters. Near to the temple, tourists may find a giant banyan tree which is considered sacred. It is believed if one of the branches is broken, there would be a big disaster in the near future.

The next allure in Kehen Temple is the regular rite called Ngusaba Dewa. It is done once in three months during the fifth full moon. The good thing is tourists are allowed to join the ceremony as long as they do not cause any havoc. Aside from this major ritual, some other rites are also available including Buda Kliwon, Tilem, Sugimanik, etc. Tourists should not miss them, therefore.

How to Get There
For those coming from Denpasar City (the capital of Bali Province), they need to spend at least 1 hour and 15 minutes. It is because the distance is 40.5 km to get to the temple from Denpasar. Have no worries. The trip becomes faster if they take Dr. Ida Bagus Mantra Street. What they need to do is to reach Bangli Regency first. Next, they should head to Cempaga Village right away where the temple resides.