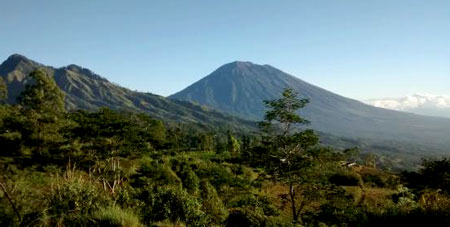 In Bangli Regency, tourists may recognize a famous mountain called Batur. Well, it is not the only attraction available, though. For instance, there is Mount Abang located in Kintamani Sub-District. To be exact, it is located in Abangsongan Village. Due to its amazing landscape and panorama, without a doubt, the mountain has become another great place to enjoy trekking and sightseeing. Not to mention it suits everyone who has an interesting hobby like photography. Here is the good thing. Mount Abang is located between Agung and Batur Mountain! Not to mention it resides near to Batur Lake!

The Nuance
In terms of nuance, Abang Mountain features several types of landscapes. Still, the most recognizable ones are pine and wet forests. Mount Abang is the highest point of the site and it features several hills (which are suitable for sightseeing and photography). What about the size? It resides on 2152 meters above the sea level and has the width of approximately 13.8 x 10 km per square. Have no worries. The trekking route is considered easy, so everyone would be able to enjoy trekking without hassles. In the morning, even the sea of clouds often appears close up there!

Exploring Mount Abang
It is, without a doubt, trekking becomes the most popular activity in Mount Abang. As mentioned earlier, the hiking route is considered easy so it is suitable for everyone regardless of the experience. Here is the only consideration. Tourists should do it in a group. Not only it becomes merrier, but it is also safer. During trekking, they may find many types of trees especially pines. Also, there is a small temple located up there used by the locals for worshipping. In this area, tourists can rest for a while before continuing their trip as well.

Instead of being a tiring activity, a trekking to Mount Abang gives a new experience to everyone (especially those who never conduct trekking). After all, the views are amazing and the air feels so relaxing up there. The best scenery perhaps is the appearance of Batur Lake and Batur Mountain! Once reaching the top of the mountain, tourists can even see Rinjani and Agung Mountain clearly!

Even though people come alone to do trekking to Mount Abang, they aren’t likely to get lost. It is because the management has provided a paved route with several signs. That means these people don’t even need a guide to reach the top of the mountain! Do not forget to rest at the first post where the temple, pelinggih, and Hindu statue reside though! Also, it is recommended to carry enough supplies especially bottled water.

How to Get There
It is easy to get to Mount Abang due to its strategic location. From Denpasar City, the trip takes about 2 hours and 6 minutes as the distance is 67.5 km. It can even be faster if tourists take Nusantara Street. Once arriving at Bangli Regency, their next destination is Abangsongan Village at Kintamani Sub-District (where the mountain resides). That’s all.