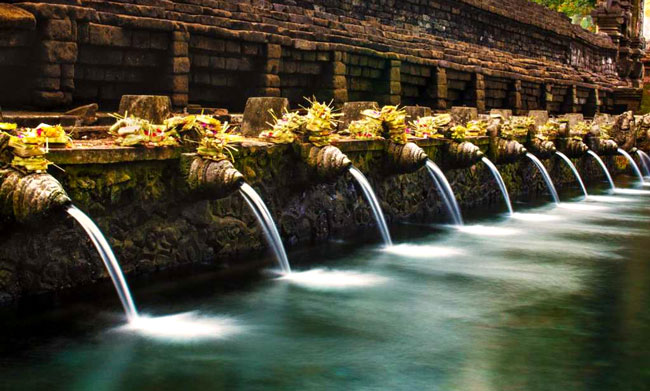 Bali Province never fails to amuse tourists, especially those who love adventure. For the next vacation destination, they can come to Tirta Empul Temple located in Gianyar Regency. To be exact, the location is in Sanding Village and it belongs to Tampaksiring Sub-District. The good thing is the location is near to Ngurah Rai Airport, so the trip would be sort and comfortable. So, what is it? In a nutshell, Tirta Empul is a temple belongs to Indonesia. Not only it becomes a place for worshipping for Hindu People, it also accommodates those who want to take a bath on the available pond.

The Nuance
In terms of name, Tirta Empul has the meaning of “sprouting water coming from the land”. It is true the locals consider it sacred and holy. The pond itself becomes the prime feature of the temple and has been visited by both nearby people and outsiders over time. For the information, the temple also comes with several parts including Nista Mandala, Madya Mandala, and Utama Mandala. Each of them represents a different part of the temple including the outside part, middle, and inside. The sacred pond is located in Madya Mandala or middle part of the temple, actually.

Exploring Tirta Empul Temple
Once arriving at Tirta Empul Temple, tourists should get the help of a tour guide right away. It is an important service, as it helps tourists to explore the site efficiently and get thorough information related to the temple after all. The first spot to explore is Mandya Mandala where visitors can find a rectangle pond with 30 lined-up showers on its sides (facing the south). In terms of appearance, it is similar to that of Buleleng’s Hot Spring. Actually, tourists can use the pond for bathing!

One thing that makes the pond unique is the shape of the showers, which represent the head of a snail shell instead of a dragon. Also, according to the locals, each shower has a distinct name! Have no worries. Tourists can learn about those names from the tour guide. Well, as mentioned before, everyone is allowed to take a bath in that pond. The only requirement is that they must wear a “kamen” or indonesia traditional fabric before entering the temple. It is a common rule applied to those who are entering sacred places of Hindu People, after all.

The water feels refreshing as it comes naturally from the soil. For Hindu People, they often conduct a rite called Pelukatan (cleansing) at the pond. The good thing is tourists are allowed to watch and join the rite as long as they don’t cause a disturbance on the site.

How to Get There
A trip to Tirta Empul Temple takes around 1 hour and 15 if tourists come from Denpasar City. It is because the distance is 38.2 km. Have no worries. It can be faster if they take Raya Tampaksiring Street. Before entering the temple, though, tourists should learn all the rules beforehand. It is a sacred place, after all.