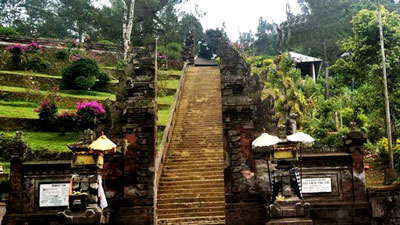 It is not wrong if people say that Bali Province is the home of heaven-like beaches. However, they may find other attractions when visiting such beautiful region including the presence of historical temples like Penulisan. The location is in Sukawana Village and it belongs to Kintamani Sub-District. In terms of region, the temple belongs to Bangli Regency. The most noticeable fact is that Penulisan is one of the oldest temples in Bali Province! In fact, it has been there since the Megalithic Era! The prime function is to accommodate the Indonesian local Hindu when it comes to worship. Still, it also becomes an interesting vacation destination for tourists (especially those who love history).

The Nuance
Another name is Tegeh Koripan Temple and it has the meaning of a home filled with a strong will and high esteem. Some people also call it Padelengan or Pamojan Temple, actually. What about the appearance? Well, it has a unique design or construction. As for the concept, it applies “Gunung Suci” or a storied pyramid. The temple is located on a hill, after all. This explains why long and stairs become one of the prime features there. The temple comes with 7 stories and each of them is connected by stairs. This concept is called “Sapta Loka”.

Exploring Penulisan Temple
Exploration and photography become two most common activities to do in Penulisan Temple. Once arriving at the gate, visitors may see the first level of the temple. It is true they need to spend some stamina to get to the next levels, especially Swah Loka or the third story. At the place, they may find two small temples called Dana and Taman Dana (which are suitable for photography by the way).

In the fourth level or Maya Loka, there is Ratu Penyarikan Temple located in the east part of the site. It is said the temple is used to worship Daydya Bujangga. What about the fifth level? Well, it only features a great view but no temples at all. In the 6th level, though, tourists may find Ratu Dahatua Temple which also comes with a unique construction. In the last level, there is a temple to worship Pengaruman. Not to mention tourists may find Gedong, which is a building to store historical and valuable items.

Aside from photography and exploration, some people also come to Penulisan Temple to learn the history. Despite the uncertain information, it is said the temple was built in 300 AD or during the Bronze Age. The construction continued later during the reign of Majapahit Kingdom in 1343 AD. At the time, the temple was used to worship God Shiva and became Kings’ favorite place to do yoga and meditation!

How to Get There
The distance between Denpasar City and Penulisan Temple is 62.1 km. That means the trip may take approximately 1 hour and 59 minutes to get to the site. As for the best route, tourists should only take Ahmad Yani Utara Street. Their first destination is Bangli Regency. Next, they can simply head to Kintamani Sub-District and reach Sukawana Village right away.